What do you get when you cross a cinnamon roll with a super rich cheesecake? You get heaven on a plate that’s what you get! Seriously guys, I even spied on this cake in the fridge, counting the hours until I could top it with glaze and cut me a whopper of a slice. And this Cinnamon Roll Cheesecake did not disappoint! 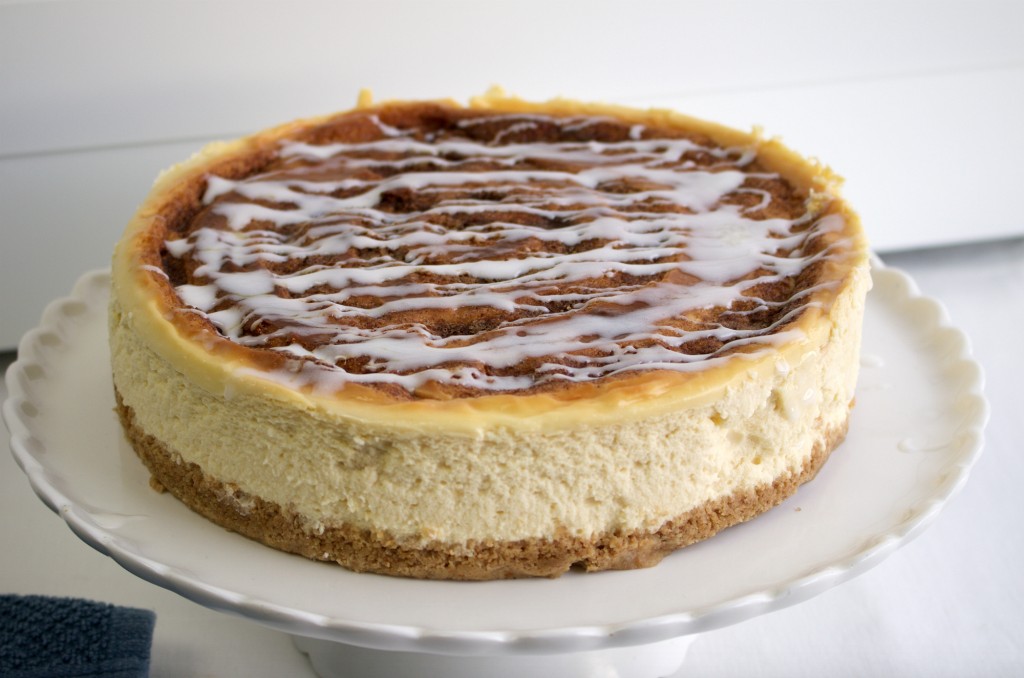 I made this cake for my hubby’s birthday. Seriously, what is it with his birthday cakes? I can’t even remember what I made for my own, but last year I outdid myself with the Toffee Bourbon ‘drool worthy’ Butterscotch Cake. That cake was intense! I don’t even like Bourbon and I must have scoffed down three slices in two days. So I’ve been planning this cheesecake for a while, and I was really nervous in case it didn’t live up to last year. 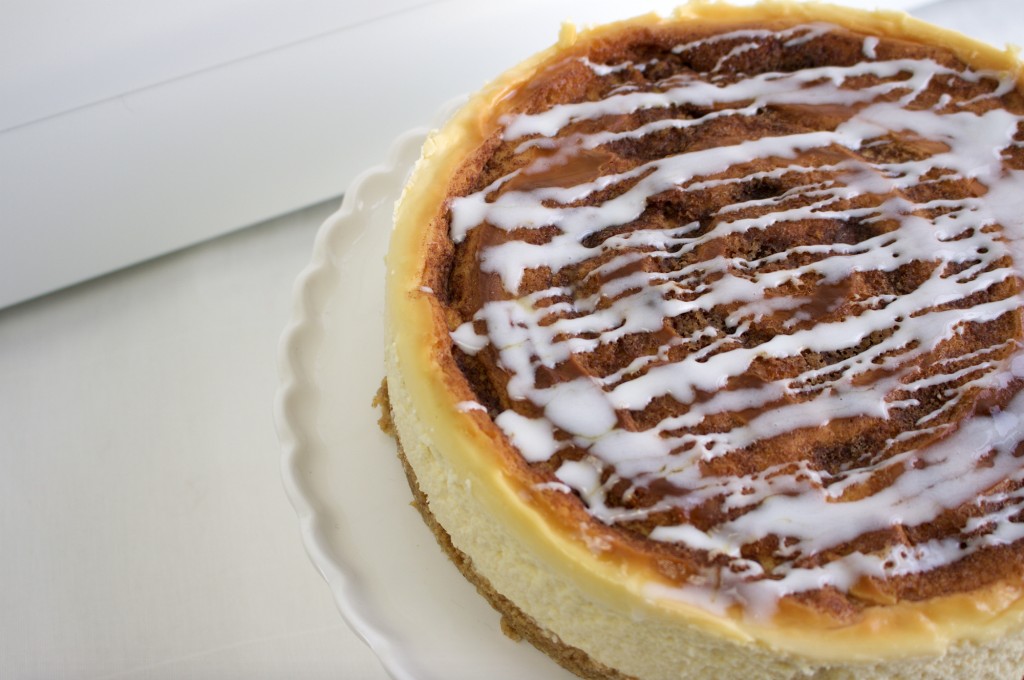 With the crust like this though, it was always going to be good! We don’t have graham crackers here in Australia, especially not these incredible cinnamon ones, so I had to really plan ahead of time to get them. Not usually my strong suit when it comes to baking. I’m generally more of a last minute, “are you kidding me, I’m out of butter?!” kind of gal. But I jumped online and ordered these amazing cookies, and then I just tweaked my usual cheesecake recipe (you can see it’s used in my Unicorn Cheesecake tutorial) by switching out some of the granulated sugar for brown sugar, and then made a very basic cinnamon swirl paste with brown sugar, melted butter and lots of cinnamon.

I did a two layer combo of half the cheesecake filling, half the cinnamon swirl, and then just repeated that again until all the filling and paste was used up. EVERY LAST DROP went in the pan to make this incredible hybrid dessert. If you don’t have a piping bag you could make your own with parchment paper, or just slowing drizzle it in with a spoon.

KEEP SCROLLING FOR A VIDEO OF THIS CINNAMON ROLL CHEESECAKE! 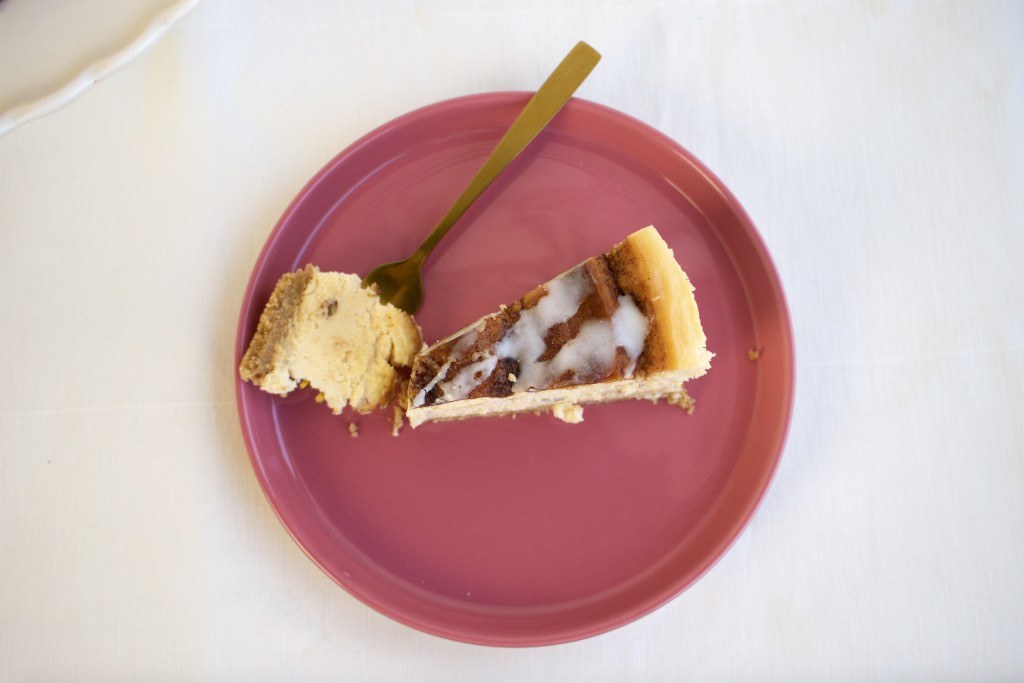 The trick to a good cheesecake is not to over bake it, and then when it’s done, but slightly giggly, turn off the oven, and use a wooden spoon to keep the oven door ajar so that it slowly cools. This will stop your cheesecake from cracking, and a happy cheesecake is a yummy cheesecake!

After an hour I remove it from it’s water bath, and let it cool some more on a rack. Then it gets wrapped in cling wrap and placed in the fridge for four hours or overnight. Then all you gotta do is mix up the glaze, and drizzle ’til your heart’s content! We could not get enough of this cheesecake, though it is extremely rich, so the slices were quite thin, and we could have easily served 12-16 people. It’s going to be a recipe I make again for sure. Hope you guys love it as much we did, oh and Happy Birthday babe. Love ya xo 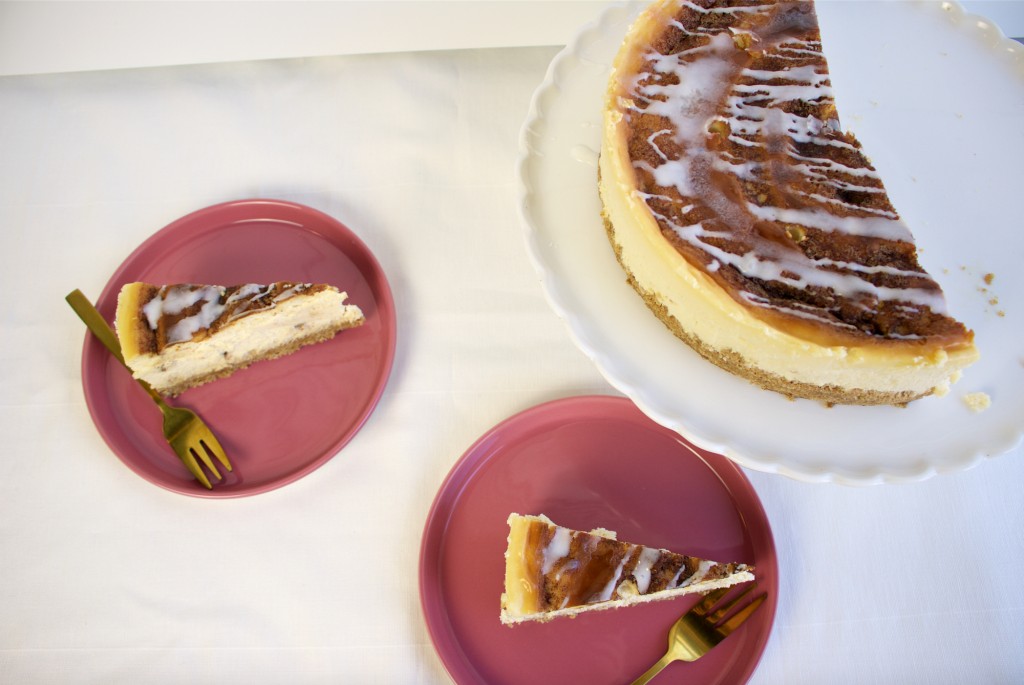