If you follow us on social media you’ve probably seen some of these “caker problem” posts I’ve been putting up. This is not the first time I’ve poked fun at my life as a decorator (see The Secret Life of a Cake Decorator series). However, this is really the first time I’ve been able to do so while also addressing some of my real pet peeves when it comes to how us decorators are perceived and treated. The fact is, you are not the only one working for practically nothing, yet you just can’t stop, because, well, it’s your passion. 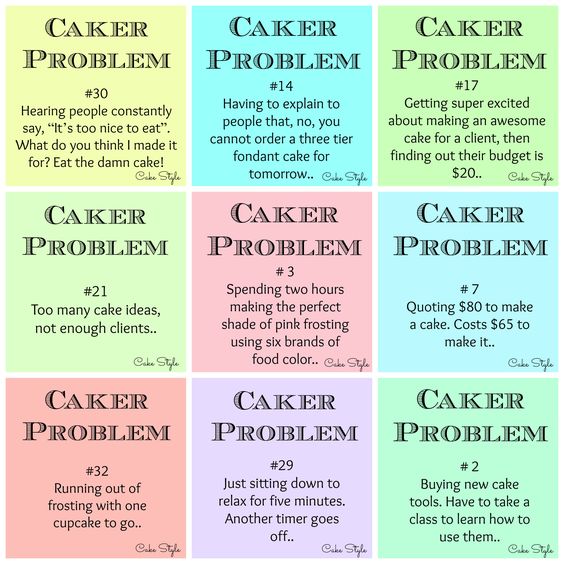 Cakers, like most artists, are notoriously underpaid and overworked. We have almost conditioned ourselves to think that doing what makes you happy means to have to live like a peasant. But I don’t think it’s the lack of funds that we hate, it’s the lack of recognition that what we do matters. That we are talented, and possess skills that most people dream of. That’s not easy, and it took skill, patience, study, and money to get to the level that we are at. And when someone scoffs at our prices, which are already too cheap, it breaks our heart a little. The fact is, us cakers are a pretty sensitive lot, who easily have their feelings hurt. So when someone thinks our cake is worth $20, it is really like saying, you’re just not worth more that $2 an hour. You aren’t valuable to me, or anyone else.

Now you might be reading this as a non caker, or the rare species known as a caker with high self-worth aka a unicorn. You might be thinking “cry me a river”.. But just imagine if you worked all week at your first job, and then at the end of the week, your boss looked at you and said, “Look, you’ve done a great job, here’s $50 for the weeks wage. I mean, you’re awesome at what you do, but it’s just time right? I mean, all you really did was give us your time”. Everyone would be up in arms. The world would collapse. Empires would fall. But on the bright side, cake supplies might become cheaper!

Someone asked me on Facebook what’s my idea for changing the status quo, and I didn’t have an answer. Unfortunately I still don’t, but I do personally feel a little bit better knowing there’s a whole community out there who gets it. Who looks at my cakes, and sees the time, and the money that went into making them. And who now know that they were created with love, but also lots of extra trips to the store, and not nearly enough sleep..