As many of you know, I’m sick. The kind of miserable sick, where you’re head aches from the second you wake up, everything tastes weird, and you can’t imagine a 95 year old smoker would sound better than you. But they do. As you may know from being a cake decorator, this is not ideal. We don’t work, we don’t get paid. That sort of thing is to be expected when you run your own business. For us though, things are a little more complicated than that. 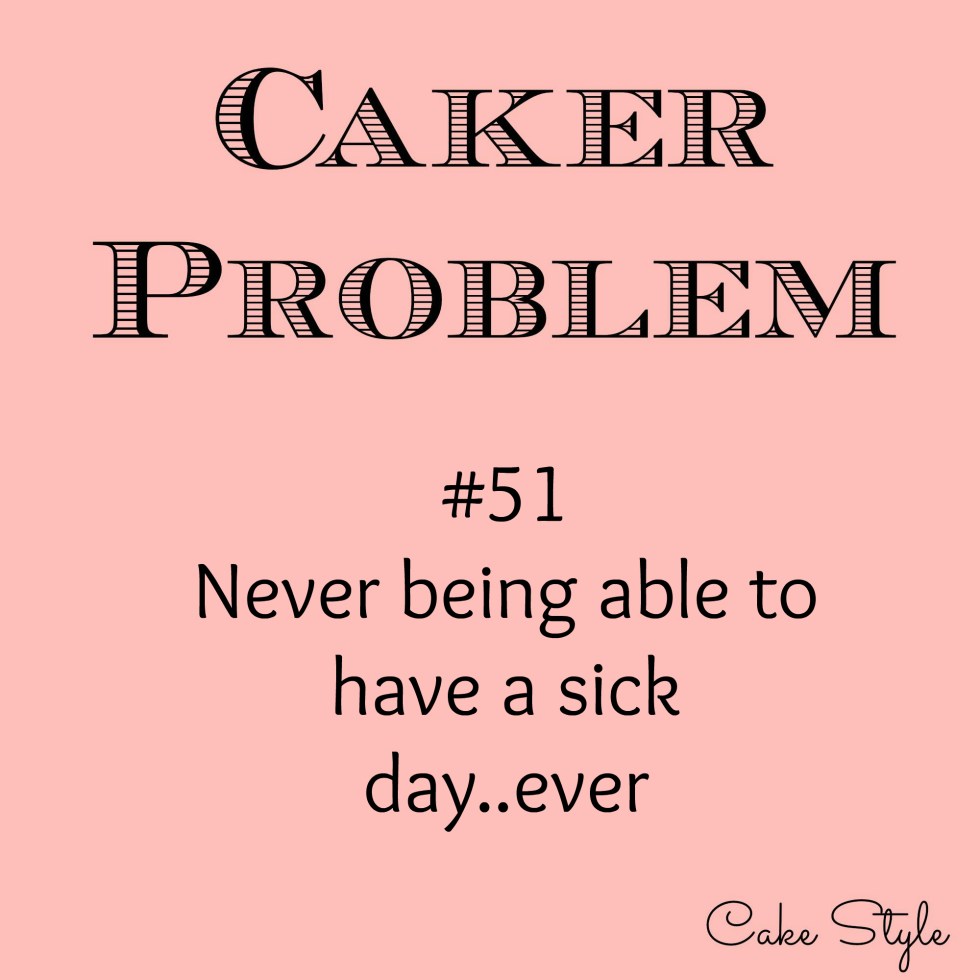 You see, cake decorators are booked well in advance. Too far in advance for most people’s liking. Why can’t you take on another order for Sunday? It’s only Tuesday for goodness sake. Plenty of time! We don’t have a replacement person to do relief work. No temp agency, or substitute baker, or understudy just waiting in the wings with a whisk and a piping bag. Generally, we work alone. In our house. For people that are not paying us enough to cover going to the Doctor let alone bringing in a replacement.

Food is a pretty bad industry for sickies. You’ve two real options. You work anyway, sick as a dog, with a face mask on, stopping every two seconds to cough up your lung, and then resting for 10 minutes while you put it back in your chest. Your eyes water; you can’t wipe them because you’ve got food grade gloves on your hands. They are permanently stuck on because you’ve got a temp, and your pores are sweating faster than an Oregonian in an Australian summer. Trust me, people from Portland were not made for the heat we have here. It makes then actually throw up. Your spouse finds you lying on the kitchen tiles trying to cool down, because you got light headed and almost passed out, and not waiting to let down the customer, you just owned that shit and decided that it was you who actually thought it would be a good idea to get horizontal on the floor, with a little drool dripping onto the tiles. You’re sick as a dog, so you might as well try to regulate your temp in a canine fashion.

I’ve actually piped on a cake for a magazine shoot for 5 minutes, lied down on the kitchen floor for 20 minutes, and then piped again, repeating that process until I somehow drove myself and said cake to the photographer’s studio. Good news, it made the cut and was featured, so it’s really a testament to the human spirit or some crap like that I told myself. Look at me! I can’t get up..

The second option is to call the customer, explain how sick you are, and they will mostly likely tell you not to worry about doing the cake. Bahahaha. I’m sorry, did you think that would really happen? No, contrary to what you might think, they would much prefer you make the cake, sick, ice the cake, sick, decorate the cake, sick, and basically breathe your germs all over it rather than not end up with a cake. Yes, that’s right, just don’t get them sick, or look remotely sick when they pick up the cake. They don’t like that, because the reality then starts to sink in for them, that they are going to eat a germ infested cake. Not pretty. So not pretty. But as long as you look like a human being at pick up, they don’t want to know about it.

Fortunately for me, I have a hubby that can take over, and when that isn’t an option, a number of local decorators help each other out when they can in an emergency. That’s right, we work together, because let’s face it, it doesn’t hurt to be owed a favour. You never know when you are going to come down with a man-sized flu, and need a little help. So while we might look like each other’s competition, chances are if you reach out and offer to buy coffee for another local decorator, you just might make a useful friend. Not only can you swap stories of the crazy lady that offered up a budget of $45 for a three tier wedding cake, but they can maybe even finish up the last of a cake, while you lay passed out on the floor surrounded by extra large tissues and listen to you droll on about how you hate being sick and don’t know who gave it to you, but if you find out, you’re going to punch them in the face. Friendship, it’s a wonderful thing!